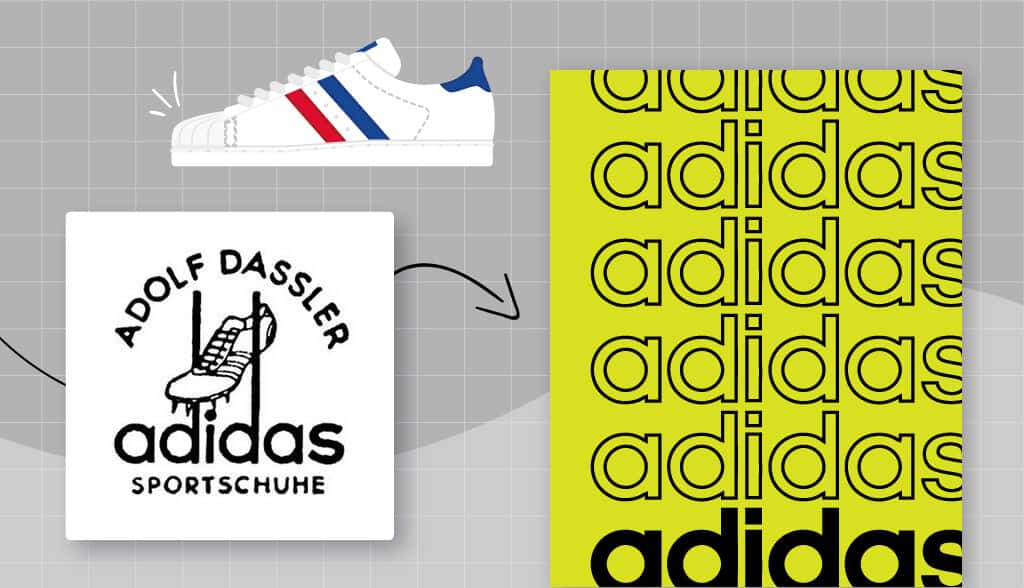 Building an iconic brand is a long game.

Today, Adidas is one of the top sportswear brands in the world; it’s logo so identifiable that even Nike and Puma fans recognize those three vertical lines instantly.

Here’s a look at how the Adidas logo has evolved since its creation to the current mark that has come to define the global sportswear market.

A Brief History of Adidas

It all started with a cobbler in a small German town.

In the early 1920s, shortly after the first World War, Adolf “Adi” Dassler began making sports shoes in his mother’s washroom. His older brother, Rudolf, joined the business, and the Dassler Brothers Shoe Factory was born.

It was in 1936 when Adolf Dassler convinced U.S. sprinter Jesse Owens to wear his shoes during the 1936 Summer Olympics. Following Owen’s four gold medal wins, Dassler shoes took off.

Now, the sportswear company supplies apparel for teams on the NBA, NFL and school levels. In 2020, Adidas reported around $23 billion in profit, which was a loss from the $27.9 billion in 2019.

The Evolution of the Adidas Logo

There have been a lot of changes to the look and branding of the company over the past century. By the mid 20th century, Adidas’ logo was starting to take shape with an identity similar to the one it has today.

By 1924, the sports shoes were catching steam. The brothers were selling 200,000 pairs annually under the Dassler logo. The original mark featured a bird carrying a lightweight shoe within a shield.

The brothers split up in 1947 after their relationship turned sour. Rudolf started Ruda (later renamed Puma) and Adolf registered Adidas. Both offshoots were named by acronyms of combining letters from their first and last names (Adi was a nickname for Adolf).

The Adidas logo’s first change in 1949 replaced the name Dassler with Adolf Dassler. The sports shoe is more detailed with spikes and the three stripes.

The iconic three stripes mark was purchased by Adolf Dassler in the 1940s from Finnish footwear manufacturer Karhu Sports. The owner was having money issues due to WWII and sold it to Adolf for two bottles of whiskey and €1,600.

By 1950, all that remained of the previous logo was the font.

In 1971, the company began making clothing, so they changed their logo shape to the now iconic trefoil. This trefoil logo is made up of three football-shapes arranged in a way in that the bottom was curved. This 1970’s version is now a throwback used for the Adidas Originals line.

The trefoil logo was meant to showcase the diversity of the products while still incorporating the iconic three lines that the brand was quickly becoming known for. The three leaves represent the North America, Europe, and Asia- the three continents where Adidas shoes were sold.

No longer was Adidas relegated to athletes. This particular logo helped the brand become integrated into pop culture, and worn by major bands such as The Doors, The Sex Pistols, Bob Marley and David Bowie, among others.

By the ‘90s, the logo shifted to another iconic version of the line trio that is now used for Performance products. The stripes used before were shifted to a slight angle, representing how they looked on the shoes. The bold trio of stripes were arranged into a mountain-shaped icon that represents an obstacle to overcome.

In 2002, the stripes were contained in a circle, looking like an animal scratch or three paths going into the background. The stripes here take on a stylized look with the ends being smaller as they sweep in a light arch toward the right side. At this point, the logo is still very flat and the font has remained the same for the logotype. This logo now represents the Adidas Style product lines.

The wordmark logo of the company is a timeless callback to the simplicity of the three stripes that made the brand so easy to identify. The logo is general enough to cover all areas of the brand while still maintaining the overall aesthetic of the company.

Since its creation, the Adidas logo has certainly gone through quite the transformation. Interesting enough, Adidas has been smart about retaining and recycling older versions of their logo creations.

In fact, all four of their current logos are used for different product lines and collections. The trefoil logo, for example, is used for lifestyle and casual streetwear, whereas the standard logo is used for the Adidas high-performance line.

The performance and sports apparel line uses the three stripes along the sides of pants, shoulders of shirts and sides of shoes. This is the most traditional form of the company’s logo, dating back to the original three-stripes mark that was purchased in the 1940s.

The throwback of the Trefoil is the one that has become popular with people completely outside of the sports scenes. From major musicians taking center stage to influencers, the lifestyle Adidas brand is a majorly popular fashion line.

The products in these lines are pricier and not designed for athletics, though the clothing still has an athleisure style. Celebrities like Kanye West, Pharrell Williams and many others have helped make this line more popular than ever before.

The standard logo features a mountain, representing the challenges athletes face and the goals to be achieved. Products in this line range from sports tees and track pants to cleats and more.

The neo-circle logo is featured on Adidas lifestyle collaborations. This circle logo still carries the three stripes but offers a different look to symbolize a daily wear line that is not focused more on practical wear.

Adidas is proof that the right logo can make a brand iconic. The design any new business owner chooses will define their aesthetic and form a connection with their target audience. Looking at the logo history of a major brand like Adidas might have helped you get ideas for your very own logo. 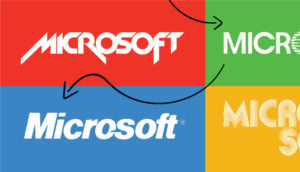