Home » Blog » How to Find and Create a Compelling Brand Story

How to Find and Create a Compelling Brand Story

In the 1970s, two young college dropouts made themselves pioneers in the computing world. Driven by a creative vision for the future, they founded Apple, a brand that today is basically synonymous with forward-thinking technology and the modern technological aesthetic.

When Steve Jobs introduced the first iPhone in 2007, he used Apple’s reputation as a pioneer and creative visionary to tell a story: The iPhone was going to be something big, the first of its kind—a touchscreen, an iPod, a phone, and online device—and it was up to consumers to use the new device to carry that story forward.

Using the iPhone, consumers themselves could represent the forward-thinking principles of Apple and participate in a new technological and aesthetic revolution to tell their own stories.

Over the decades, Apple’s masterful brand storytelling has allowed it to enjoy a huge amount of success. The context, mission, and inspiration behind their branding have ensured that Apple is more than just another drab and dry tech company putting out the latest consumer products.

Instead, Apple’s story has guaranteed it a special status and a whole bunch of devoted customers—people committed to the creative, high-end, and futuristic technological vision that the company brings.

What is a Brand Story? If you take a closer look at today’s companies, you’ll find that some of our favorite brands, like Apple, are inseparable from their stories.

A brand story is a narrative about a brand that evokes an emotional response and forges deep connections between a company and its audience. Brand stories typically encompass not only the history of a company, but also that company’s mission, values, source of inspiration, and vision for the future.

Every company, big or small, has a brand story. Creating your brand story is just a matter of finding that story and learning how to express it in a way that’s simple, relatable, compelling, and marketable.

By generating an emotional connection with your audience, a brand story improves customer trust and builds customer loyalty. It’s also a great way to give your brand a strong identity, brand personality, and voice.

How do you Create a Brand Story?

Only you know the story of your business, and you’re the best person to figure out what it is. Here are some tips for uncovering your brand’s narrative:

Pinpoint your company’s inspiration and mission

Think back to how and why you started your company. What inspired you to create it in the first place? What problem were you trying to solve? What values and goals were you driven by?

You might think the reason you created your company was because you noticed an opening in the market and wanted to make money.

For example, eyewear company Warby Parker’s story isn’t about an opening in the market; it’s so much more.

Their story is about creating low-cost, customer-focused eyewear that considers customer needs like affordability, environmentalism, and social consciousness.

The company’s founders noticed that a single eyewear company dominated the market and kept prices high, so they decided to offer an alternative—for the good of its customers. On top of that, their glasses are plant-based, polished by hand, and are freely donated via nonprofit partners to people in need.

That’s how and why Warby Parker was founded–and that’s a story customers will happily get behind.

Connect with your target audience

The story of Warby Parker reveals another key feature of good brand storytelling: Creating an emotional connection with your target audience.

If your brand story doesn’t forge emotional connections, your audience won’t have a reason to care about your company. But if it does, you can build customer trust that lasts a lifetime.

That’s why creating a brand story lies in analyzing your audience. Think about how to talk about your company and products in a way that your audience can relate to, whether it’s through shared values, goals, or hobbies.

Fast food burrito chain Chipotle tells a story that resonates well with customers and, most importantly, creates trust. Its Back to the Start commercial highlights the importance of sustainable farming. Watch it here:

Through their distinct brand voice, the brand comes across as more personal than large-scale industrial farms, and promises its customers ethically-sourced, quality ingredients.

Put your customers at the center

Your brand’s storytelling isn’t about any one person; it’s not about the founder coming to save the day with her new idea (sorry to burst your bubble). On the contrary, your brand’s story is about your company as an entity–with the customers as the heroes.

Rather than aim to persuade your customers, your story should allow customers to participate in your brand. Your company was created with a goal, and your customers are the heroes who bring this goal to the finish line. They’re the ones who realize this goal and carry the story forward.

In other words, the best brands create their own stories, and then set them free.

Eventually, your brand is going to grow—and if you’ve done your job right, your customers will be talking about you without your prompting.

Airbnb is an example of a company whose brand story not only leaves room for customers to participate, but is also entirely dependent on customer participation. As its Community Stories section suggests, the story of Airbnb is the story of its customers.

Airbnb is a platform, and its customers (both the hosts and the guests) are the heroes, exploring new places, meeting people from around the world, and creating their own sense of home.

It’s tempting to make your company seem greater than it is, to stretch or embellish your brand story with the hope of creating a more compelling narrative.

But, don’t pretend you’re something you’re not; customers can smell inauthenticity from a mile away.

Several brand stories haven’t gone over well precisely because they lacked authenticity. In 2015, Volkswagon was caught cheating on emissions tests, which they had hoped would bolster their story about offering cleaner, greener vehicles. General Mills was involved in a lawsuit over their naturally flavored strawberry fruit roll-ups, which in fact didn’t contain strawberry at all.

Fabricated brand stories only hurt your brand, making it untrustworthy and unreliable. The true story of your company is a compelling one—you just need to find the right way to tell it.

Commit to the narrative

The story you’re telling needs to be supported by the brand imagery you put out into the world. They may seem trivial, but design elements like colors, fonts, background photos and of course, your logo, have a huge impact on the way your customers perceive you. And, like we mentioned above, your customers have to be involved in your brand story in order for it to be effective and ring as authentic.

Once you have an idea of the story you want to tell, commit to it with the imagery you use. As you design brand materials, be it posts on social media or posters advertising a campaign you’re running, make sure that they contribute to the story you’re telling and support the narrative you want your customers to get behind.

The last tip for creating your brand story is to keep it simple.

If you pack too much complexity into your story, your core message could end up being diluted within a complicated plot, and your audience could lose track of your main point.

A simple story is easy for audiences to remember and trust. It’s also far more marketable, because you’ll be able to size it down to just a few simple sentences.

Stick to a three-part story arc, without too many twists and turns. First, talk about the problem you set out to solve. This is a great time to talk about your values, inspiration, and mission.

Second, talk about how you solved that problem. Throw in a roadblock, and discuss how you overcame it.

Finally, end on an uplifting note. Rather than wrap up your brand story, be forward-thinking. Talk about your company’s success and look toward the future.

A brand story isn’t just about the history of your company. It’s about communicating your company’s “why”—your mission and values. Use these to find common ground with your audience and to make your company relevant and meaningful to consumers.

Getting your audience to understand and care about your brand is a big part of getting them to trust you. And when they trust you, they’ll become happy and loyal customers.

Share your story everywhere—on social media, on your website and blog, in your articles and guest posts, and at conferences and talks. Make your story an integral part of your brand, and use it to showcase your brand’s personality and strengthen your brand’s identity and appeal. Before you know it, your customers will be telling your story, too!

How to Create a Strong Brand Identity What is a Brand Voice, and How do I Create One? (+ Downloadable Templates) 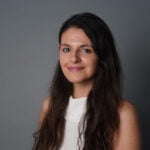