The Different Types of LLCs 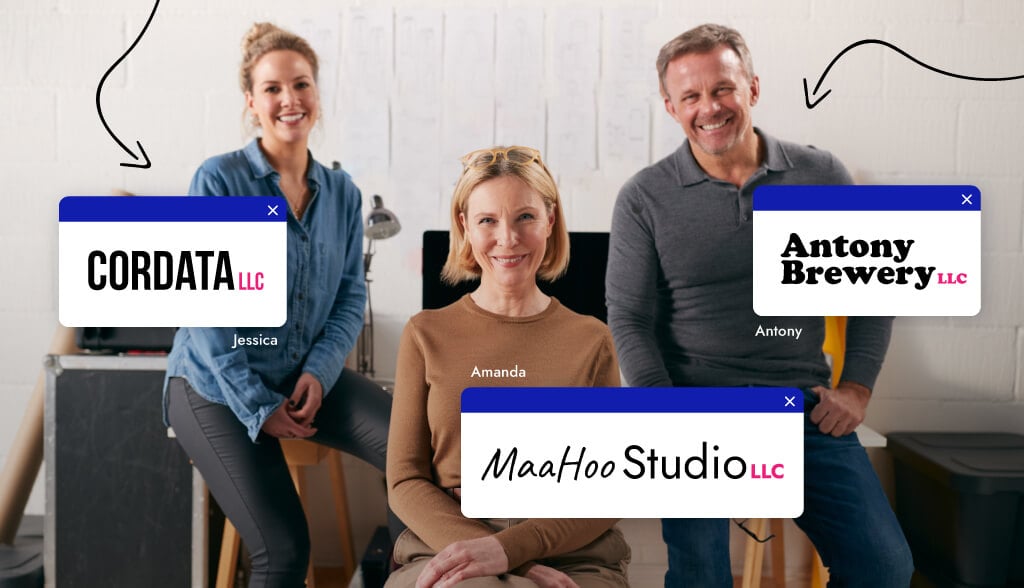 Did you know that there are 8 types of LLCs? As if choosing a business structure wasn’t tricky enough!

But here’s the thing: If you’ve already decided on starting an LLC, you’ve done the hard work. You know that an LLC legal structure enables you to moderate your liability and benefit from favorable tax treatment.

So, why are there different types of LLCs? How do you choose? And what effect will it have on your business?

Well, each type of LLC exists to make your life easier, and your choice depends on why you’re in business. Regarding the effect your choice will have on your future, read on and find out.

The first recording of an LLC legal structure originated in Germany around 1892. Wyoming state was the first to recognize it in America, initiating the first U.S.-based LLC in 1977.

The idea of the LLC business structure was to go beyond “sole-proprietorship and partnership associations,” enabling owners to create a tax-friendly company while maintaining a level of protection for their personal assets.

The LLC business structure achieves this by using pass-through taxation, equal to a sole-proprietorship or a partnership, but combined with the limited liability of a corporation.

And that’s great because it may help to protect your assets and reduce your paperwork!

And you can tailor an LLC legal structure to suit your company’s situation, making the different types of LLC ownership the ideal choice for most business owners.

While each state has its own rules regarding LLCs, their legal structure is similar. All that remains is to choose the right type of LLC for your business.

Different Types of LLC: What You Need to Know

Wyoming created the first U.S. LLC to address the needs of local entrepreneurs who weren’t in a position to start a corporation but wanted limited liability protection while maintaining the simplified tax structure of a sole-proprietorship and partnership.

As the popularity of LLCs grew (there are over 2.5 million in the U.S. today), individual states came to realize the need for different types of LLC structures.

Today, each state governs LLCs in their own way; some recognize all 8 types while others only 5 or 6, and all have their own rules and regulations for running them.

The good news is all 8 types of LLCs are tailored for every imaginable business need; you just need to find the right fit.

How to Choose the Right Type of LLC for You

Most business owners have similar wants, needs, and goals, but it’s how we achieve them that differs. That’s why you must choose the right type of LLC.

Fortunately, the procedure for registering each type of LLC is similar in most 50 states; where they differ is which type of LLC they recognize.

The big question is: What’s the best type of LLC for your business? And the answer is… it depends on what you want to accomplish.

To help answer both of these questions, let’s look at the 8 types of LLC:

Solo-entrepreneurs are best choosing the single-member LLC legal structure due to low set-up costs and minimal paperwork compared to other LLC structures.

However, like any business, there are legal obligations associated with starting and running one such as taxes and debts. As you’re going it alone, you’ll be solely responsible for compliance.

LLCs are governed by state laws known as default laws, which give your state the power to choose a course of action should an LLC run into financial difficulties or managerial disagreements.

How does that affect you?

How to avoid liability

Advantages of a single-member LLC

Disadvantages of a single-member LLC

Even the most successful businesses include a dissolution agreement in their operating agreement, known as “a get-out clause.”

A get-out clause describes the situations that warrant an LLC dissolution and how it will proceed. And in case of illegal activity or internal disagreements, it’s a good idea to have one as it allows members to request involuntary dissolution.

For tax, the IRS views a single-member LLC as a “disregarded entity,” also called a “flow-through entity.” This means you are not separate from the LLC, and you pay any taxes owed by your company as part of your income tax return, similar to a sole-proprietorship.

You guessed it, a multi-member LLC has over one member, but apart from that, the set-up is similar to a single-member LLC. The only difference is all members must agree on and sign an operating agreement.

A member-managed LLC is when members manage the LLC themselves. Owners can act on the company’s behalf as long as they are compliant with the operating agreement.

A manager-managed LLC is a popular choice when some LLC members act passively, such as silent investors, or require outside managerial staff with more experience. If you choose this LLC type, ensure the manager-member structure is apparent in the operating agreement.

The advantages of a multi-member LLC, member-managed LLC, or manager-member LLC

The disadvantages of a multi-member LLC, member-managed LLC, or manager-member LLC

Multi-member LLC owners pay taxes like partnerships. Meaning members pay taxes on their share of the company profits and losses by completing a Schedule E (form 1040) and attaching it to the tax return.

You can form multi-member LLCs/member-managed/manager-member LLCs in all 50 states.

A domestic LLC is a business formed within its home state. A foreign LLC is when a legal entity does business in a jurisdiction or state other than its initial one.

For example, if you register your LLC and do business in Wisconsin but live in North Carolina, your LLC would be a foreign LLC in Wisconsin.

You’re only required to register as a foreign state if you’re trading full time or have a physical business location where you’re doing business.

And if you conduct business with a client out of state, you don’t have to register your business as a foreign LLC.

However, you must first get permission from that state to trade because you could face a hefty fine if you don’t.

Advantages of a Domestic LLC and Foreign LLC

Disadvantages of a Domestic LLC and Foreign LLC

Most states require foreign LLCs and any trading in that state to file state income tax returns.

Check the state’s website where you’re doing business to ensure you’re complying with all legal and tax obligations.

The SLLC series (limited liability company) comprises an umbrella or parent LLC and smaller LLCs within its control, known as series LLCs or cells.

Each series/cell has its own members/managers, assets, and purpose. Each one is a separate entity within the parent series LLC.

So, if one series goes into debt or fails in its obligations, the liabilities are most likely only enforceable against that series. This makes them a popular choice for business owners with multiple interests.

For example: Jane’s a restaurant owner with a successful business in downtown LA, and she’s thinking of opening a second branch uptown.

By forming a series LLC, she’s reducing the risk for her financial investment in the first restaurant should the second one fail.

And real estate investors with several property investments could set each up as series-LLCs acting under the primary parent LLC. Thus reducing the chance of personal liability if the market flunks and the LLC is sued for failing to repay debts.

Advantages of a series LLC

Disadvantages of a series LLC

The IRS is still deciding how to handle series LLCs. But all states tax them in their own way, and each series is taxed separately.

Some states don’t allow Series LLC formation but recognize ones formed in other states; however, foreign LLCs can trade within these states.

The jurisdictions that allow series LLC formation include:

An L3C is often called the entity for entrepreneurs who value profits and purpose because it’s a hybrid created to attract philanthropic capital and private investment in ventures designed to generate profit and benefit society.

It gives a company the prestigious air of a not-for-profit institution, including the promising marketing strategies and positive press, while also making a profit.

Advantages of an L3C

Disadvantages of an L3C

Because other businesses can’t be sure how you’ll spend their money, it makes it difficult to persuade them to invest. But where it falls flat with investors is donations that aren’t tax-deductible.

I mean, why would a company donate to those in need if they can’t save money in the long-run, right?

An L3C pays taxes similar to any other LLC. If an L3C has multiple members, it’s taxed as a partnership by default. If you’re a single-member L3Cs, you’re a pass-through entity and file taxes on your tax return.

Although L3Cs can operate in all 50 U.S. states, incorporation is limited to the following states:

An anonymous LLC enables you to form an LLC legal structure without providing the identity of the owners, managers, or members.

The anonymous type of LLC ownership aids in minimizing legal liability and protects your privacy by keeping your ownership out of the public record.

Companies and individuals that use anonymous LLCs might want to keep their investment and involvement under wraps for various reasons, including their image.

Advantages of an anonymous LLC

Disadvantages of an anonymous LLC

An anonymous LLC pays taxes the same as any other LLC.

Nevada has always been a business-friendly state, proving so when they enabled the first restricted LLC structure on October 1st, 2009.

This type of LLC ownership benefits those seeking lower tax rates when transferring assets to family members. It isn’t meant for conducting traditional business dealings and is only helpful for people with multiple properties.

To form a restricted LLC, all a company has to do is tick the appropriate box when filing its articles of organization.

And as the restrictions are flexible (by amending the LLC’s articles of organization), it’s a concept that should grow in popularity.

Advantages of a restricted LLC

Disadvantages of a restricted LLC

While the assets can’t be liquidated, there is some ambiguity surrounding a restricted LLC and tax.

Available information indicates that a restricted LLC can re-evaluate its worth using what’s called a “new market-value formula,” reducing the company value and lowering federal and state tax liabilities.

Many states require professionals who require state regulatory board licenses to trade, such as “accountants, legal advisers, and medical providers,” to form a PLLC legal structure.

A professional limited liability company works in much the same way as any other LLC entity, reducing the risk to owners, members, and managers from personal liability and providing equal flexibility regarding management structure and pass-through tax.

One exception is California. Professionals cannot form a PLLC or an LLC; instead, they must create a limited liability partnership or a professional corporation.

Advantages of a PLLC

Disadvantages of a PLLC

The IRS (Internal Revenue Service) has no recognition of PLLCs or LLCs. Meaning you must choose to pay tax as an individual flow-through entity equal to a sole-proprietor, a partnership, or an S Corp.

Not every state allows PLLC formation, but 29 do:

Now that you know what the 8 different types of LLCs are, you can choose the right one for your business.

But remember, it’s not only your government and state requirements that are important. Your requirements, driven by your dreams and goals, are equally important when choosing from the 8 types of LLC.

Take your time; there’s no rush. All that really matters is you choose the type of LLC that supports you and your business, enabling you to achieve the success you deserve.

This portion of our website is for informational purposes only. Tailor Brands is not a law firm, and none of the information on this website constitutes or is intended to convey legal advice. All statements, opinions, recommendations, and conclusions are solely the expression of the author and provided on an as-is basis. Accordingly, Tailor Brands is not responsible for the information and/or its accuracy or completeness.