I’ve been told that being cool in 2019 means gorging on avocados, following indie music, and claiming you love Polaroid cameras (even if you’ve never actually seen one in your life).

But if none of those things speak to you, that’s okay – the world of design has its own elite, and anyone can join with the proper intel. For example, some color trends are killing it this year, while others have receded into the background of the under-appreciated and overlooked.

Logos, too, have an in-crowd of their own, and we’re privileged to have an all-access pass into their crew. These logos are confident and chill; they’re carefree but refined. In fact, there’s no formula for what makes a logo cool – you’re either “it” or you’re not.

To show rather than tell, we’ve collected 16 examples of our favorite logo leaders and separated them into categories. If you think a logo on this list doesn’t cut it, don’t hang us out to dry – cool is in the eye of the beholder. As long as you’re inspired by something you see, we’re on the right track. Anyway, we’re pretty sure that by the end of this post, you’ll want to design a logo of your own.

As many people know, logo design trends tend to repeat themselves, and some of the coolest
logos are ones that call back a bit of the past. These logos may be old school, but in a way that
makes us nostalgic for simpler times.

Check out these retro fonts and muted tones – you can practically hear Billie Holiday
playing in the background. 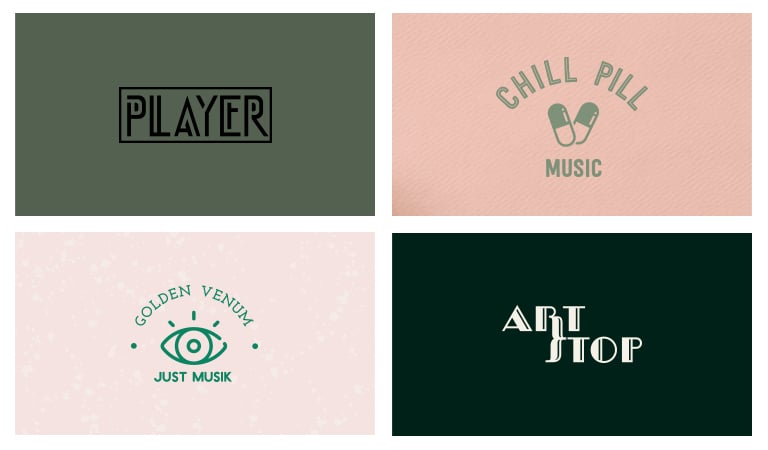 What’s cooler than designs that don’t even need color to stand out? Nothing!

There’s a reason black and white photographs have remained so popular throughout the years, and the same aesthetic appreciation applies to black and white logos; the contrast is sharp, the design is versatile, and the lack of color allows room for the imagination to fill in the gaps of any brand’s story.

But analyzing what makes something cool isn’t very…well, cool, so have a look for yourself. Every successful business provides some sort of unique value to their audience, and unique logos – like the ones below – are the best messengers.

You probably haven’t seen many out-of-this-world fonts, nor a color combination that hits every section of the color wheel – yet somehow, these quirky designs work! The most riveting logos are the ones that dare to be different, and nothing says cool like those who stray off the beaten path.

Bold logos are good for all types of logo design whether through fonts that toe the line of illegibility or icons that make you scratch your head. Either way, these logos don’t apologize for who they are – they’re too cool to care what others think. Do you have a vision for your brand yet? Whether you swing towards team vintage or black and white is more your thing, there are a ton of cool logos out there – and even more left to be created. Create your cool logo today with Tailor Brands Logo Maker

Vintage Logos: Why Old School is the New Cool

21 Animated Logos That will Move Your Business Ahead